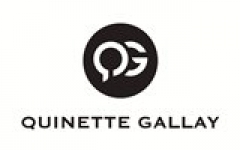 Quinette Gallay: up there among the stars…

Quinette Gallay, the European leader for auditorium seating, has just been awarded the prestigious Etoile de l’Observeur du Design for its latest, new-generation cinema seat, the I-One. The environment-friendly I-One is packed full of innovative echnologies and offers outstanding comfort.
This new seat sets the seal on the partnership between Quinette Gallay and the French designer and three times award winner Stéphane Mathieu. The I-One will feature alongside the seats in the French National Assembly and in the opera houses of London, Paris, Moscow, Beijing, New York, Melbourne and Rio. Thanks to the Etoile de l’Observeur du Design, the I-One’s success will radiate far and wide, from the Bombay suburbs to downtown Rio de Janeiro.
This prestigious award, which is a kind of French “Oscar” for design, was presented to Quinette Gallay on 8th November, at a ceremony organised by APCI and backed by the Ministry of Industry. It casts a spotlight on the company, whose export performance is outstanding.
QUINETTE GALLAY: our traditions have a future
Quinette Gallay attributes its growth to innovation and tradition. Thanks to the sleek lines, high-quality materials and traditional grace of its products, it is able to reach markets in all four corners of the globe, using the “Made in France” label as a calling card.
Its story began 65 years ago when it started to design and develop auditorium seating, to offer advice to the world’s greatest architects and designers (such as Jean Nouvel, Philippe Starck, Jean-Michel Wilmotte, Zaha Hadid, Christian de Portzamparc and
Ora Ito), and to manufacture and install each seat with the precision and meticulousness of a goldsmith.
Quinette Gallay is taking full advantage of the growing demand for equipment for cultural facilities, and its products are successfully riding the wave of market growth. In 2011, export sales will account for 60% of the company’s turnover (i.e. almost €16.8 M of a total €28 M). In other words, it will have designed, created and manufactured 150,000 seats and designed over 300 seating layouts for its foreign customers.
The inauguration of the Qatar National Convention Center in Doha, at the upcoming meeting of the OPEC conference, will provide yet another opportunity to link the company with the biggest convention centre in the world (over 8,000 seats!).
The I-One: the story of a future blockbuster
Quinette Gallay gave a preview presentation of the I-One at the Cannes film festival, and it has already won over the cinema operators. Its resolutely modern design and its outstanding comfort warrant the company’s show of optimism: it has set sales targets of approximately 10,000 units for the first year and of almost 30,000 seats per year subsequently.
Design, Creativity, Innovation: Quinette Gallay’s cocktail of strategies to stave off the economic crisis
In addition to launching the I-One, the company is continuing to manufacture furniture designed by globally-renowned architects and designers. Little by little, Quinette Gallay is asserting itself as an essential, top-of-the-range designer, creator and
manufacturer in the interior design market.
This should enable the company to significantly grow its business, with the furniture design, creation and manufacturing side set to represent 15% of its turnover in 2012.